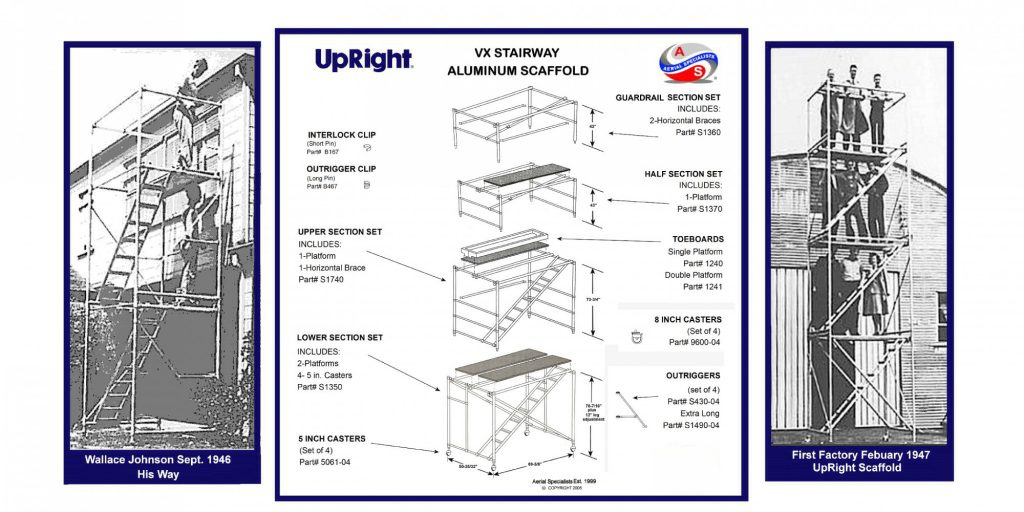 UpRight was founded by an American Pilot after World War II.  Wallace “Wally” Johnson was setting up to paint his house in California, but could not find scaffolding that could be easily used on the uneven ground surrounding his house.  So, he constructed his aluminum scaffold tower with adjustable legs.  He immediately recognized the commercial potential for his new invention and founded UpRight Scaffolds. (see photos on the V-X Stairwell Scaffold page)

By the end of the 1950s UpRight’s aluminum alloy towers was a market leader in the USA.  The company began seeking new shores to conquer. The first orders were shipped to Europe in 1958.  Still, Johnson did not sit on the success of his adjustable scaffold—he also invented the first mobile Aerial Work Platform with a split deck for aircraft.

Demand outgrew the capacity of his small Berkeley workshop and he moved to a larger facility in Selma, CA.  In 1972 UpRight’s new factory in Selma was enlarged to produce a new product, the Flying Carpet Scissorlift, which soon outsold scaffolding to become the company’s main source of revenue.

Wallace Johnson was elected as mayor of Berkeley, California and was successful in having the Bart Rail System constructed underground to preserve the beauty of the town he loved.  Choosing to pursue other interest he sold the company in the late 1970s.

Under new ownership, the UpRight product range expanded to include a new series of scissor lifts a sigma arm lift, and a Speed Level version of the sigma arm lift that could self-level on rough terrain.

During the 1990s UpRight’s range of powered AWPs quadrupled. It produced its first trailer-mounted boom lift, the TL33, in 1995. Its first self-propelled boom lift, the SP37, and a couple of micro-scissor lifts, the MX15 and MX19, were introduced a year later.

In 1999 UpRight ceased manufacture of UpRight Aluminum Scaffold in the United States. 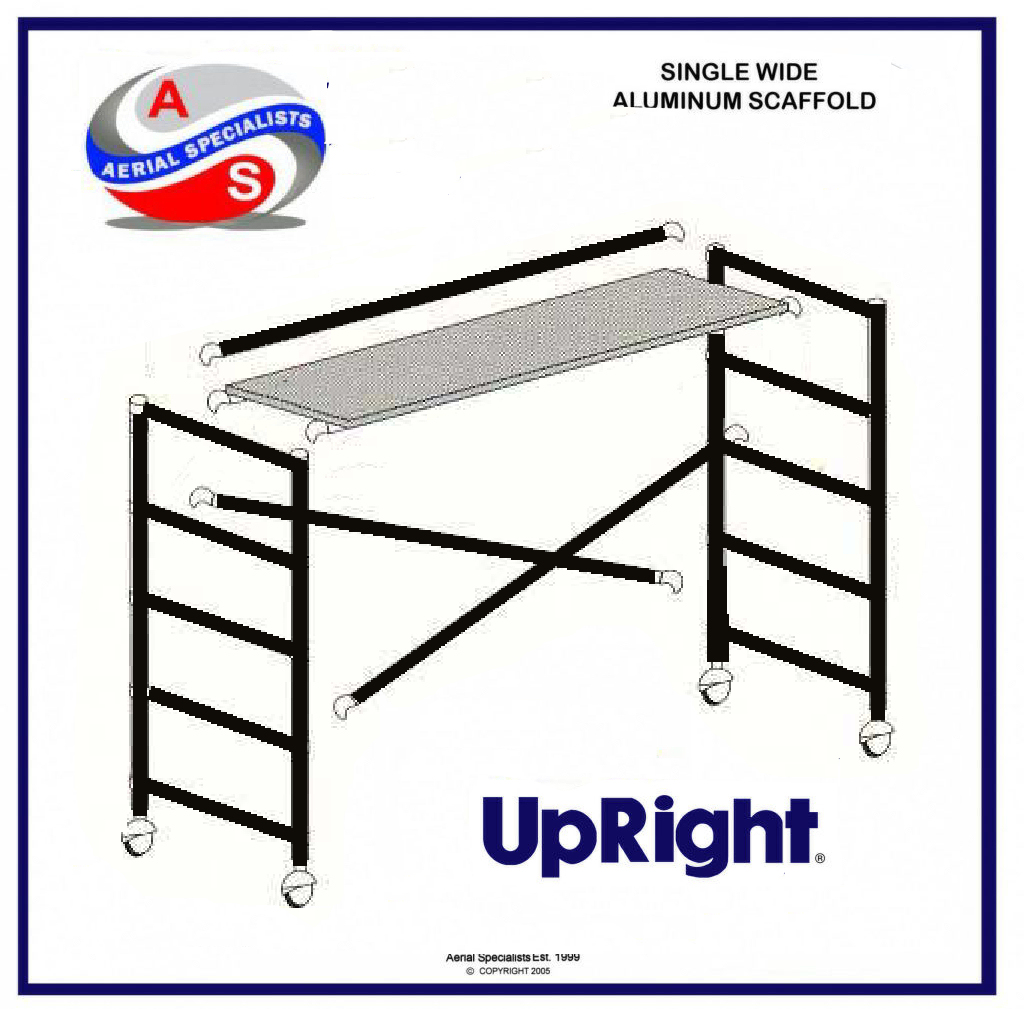 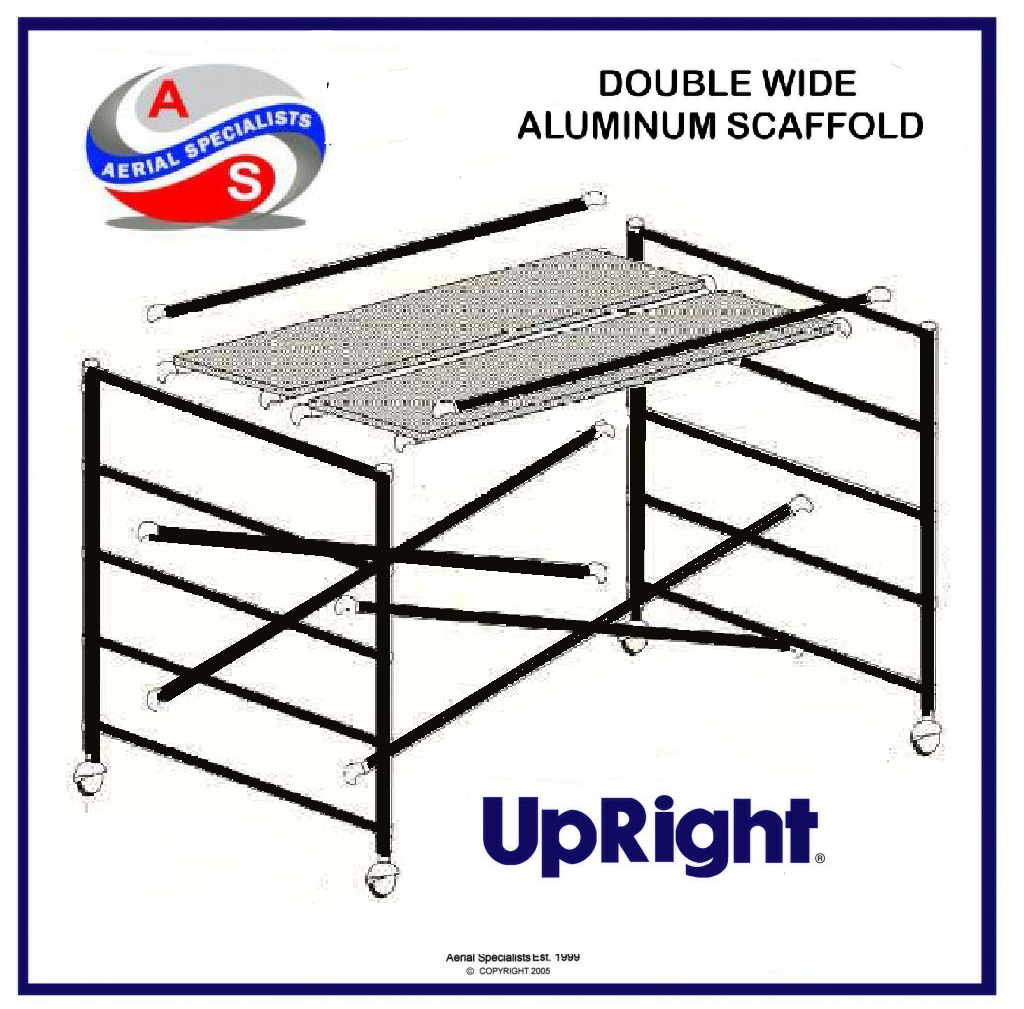 What are the advantages of using UpRight aluminum scaffolding? Set up and movement on high-value floors without worrying about hydraulic leaks or battery... 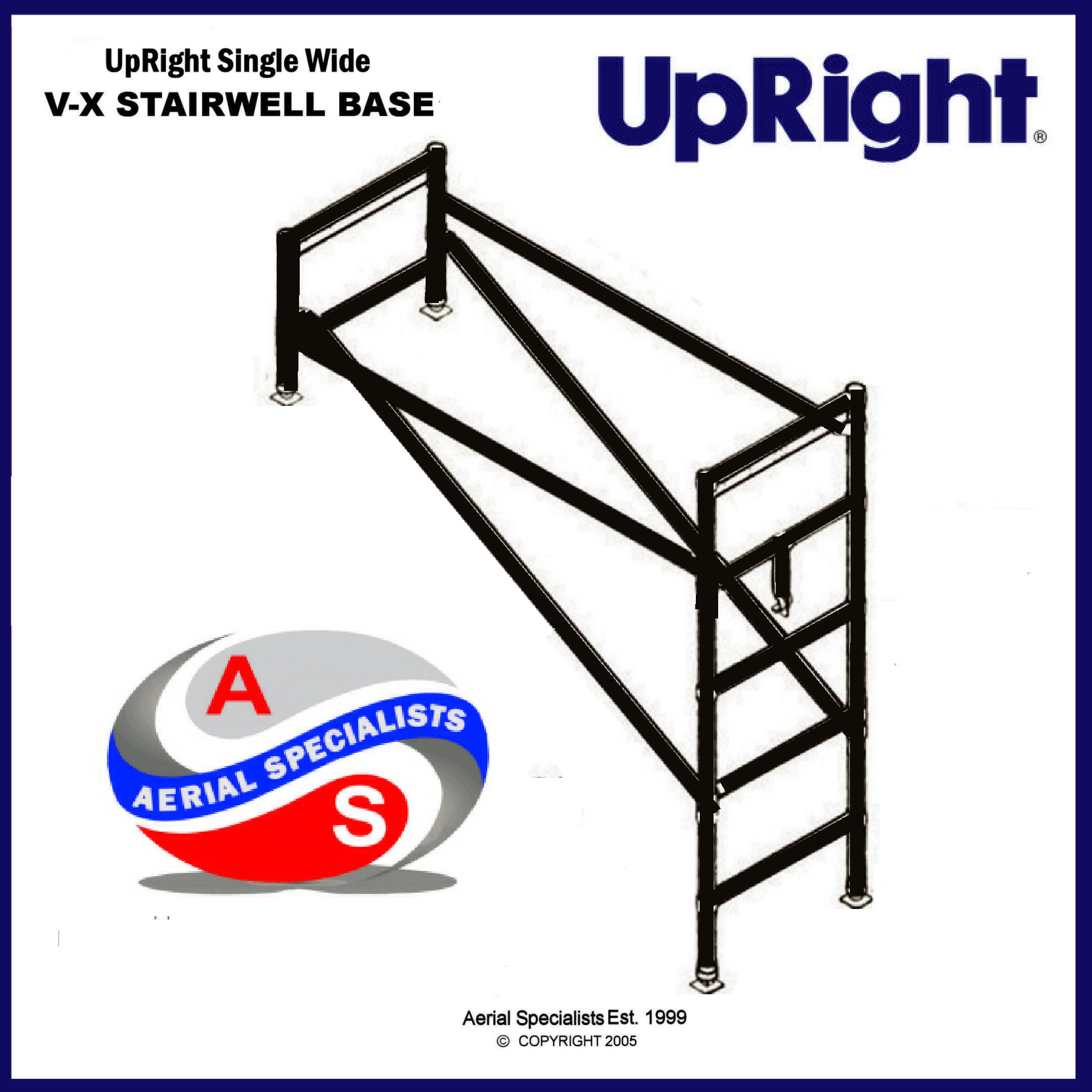 UpRight VX Stairwell Scaffold Sets The safe way to access above stairwells. Available in Single Wide and Double Wide Base Sets for 6 FT and 8 FT Systems.

I know my grandson will be using this scaffolding when he takes over our Log Home!

FYI, I have my 8 year old grandson helping me to erect and take down the “UpRight scaffolding safely and with ease.

Again, thank you for offering your expertise to me in coming up with a most suitable scaffolding package that I will enjoy using for a very long time.

I would highly recommend Aerial Specialists and “UpRight Scaffold to anyone who is in the market for scaffolding.

I am approaching 70 years old and have used several different scaffolding mfg’s products in the past, (steel and aluminium pipe) and have to say the “UpRight” product you offer is far Superior than any I have used.

I just wanted to let you know I received my order, of “UpRight Aluminium Scaffold” as per your quote, in perfect condition.

We only need to know three things to get you an itemized quote.